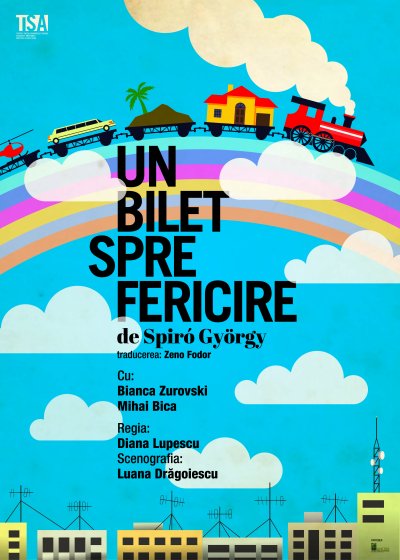 A ticket to happiness

Spiró György (born 1946) is one of the most prominent figures of Hungarian post-war literature. Having an important career as a playwright, novelist and essayist, he is now an associate professor at the Institute of Art Theory and Media Studies (ELTE) Budapest.
As a playwright, he held numerous awards, even if his direct style, the sometimes frustrating language often provoked adverse reactions on the side of the conservative side of the Hungarian critique.
His notoriety crossed the borders, his work was translated and staged in many theatres in Europe, the best known being Chicken cutlery ( assembled in Romania at the “Bulandra” Theater). Ticket to Happiness (originally Prah – Drop, in Croatian language) is also frequently played. The play  tells the story of a poor couple facing a winning lottery ticket.

The play from the Braşov Contemporary Dramaturgy Festival last autumn was staged and presented to the audience from Brasov by director Diana Lupescu, stage designer Luana Dragoiescu and actors Bianca Zurovski and Mihai Bica. It’s about the play A Spiró György ticket to happiness (the original title – Prah, meaning “dust” in Croatian).

During the play, I remembered Cesare Zavattini’s book, “The poor are stubborn.” A playful, well-directed and impeccable piece played by the two wonderful actors from the “Sica Alexandrescu” Theater, who step in the atmosphere just before the beginning of the play, which attracts the audience into their atmosphere and into their story,  especially that the play is played at the Studio Hall, which is an intimate and familiar amateur theatre. There are only two characters on the stage, a normal, simple and poor couple(Eastern Europe) who live in the house that the parents of the woman inherited from their parents, a house they can not sell, but they would not want to sell it anyway, because the wife sees in it the whole history of her family, a house that reminds her constantly of her father
The husband returns home very excited and later than usual. She asks him what’s wrong – if he got sick, if he’d been laid of of work, if he failed the factory where he works, and so on. In fact, the man was secretly playing at the lottery and had won a huge amount of money, which brought them out of the poverty that bore them all their lives. At this moment, the drama-existential play takes a comic and humorous turn. Because this “happiness” ticket becomes a burden that the poor and not too young couple can not carry. The winning ticket is hidden from one place to another simply because “we hid it there already”, the couple discusses whether or not to tell the children about their wealth, children who will now become wealthy profiteers who will only speak in languages ​​they do not understand. Now that they are really rich, the two spouses express all their frustrations, marital problems, and the discontents hidden up until  that moment, until the wife asks him to leave her home. It’s worth going to the theatre not only because of these absurd-existential dialogue but also to watch a couple of exceptional actors more than welded and see how the characters solve this situation … much more complicated than we could imagine ourselves, those who have never won the lotto, many of us for a simple reason – because we did not play. Enjoy the play, friends, happy evening!